The 44th Pillsbury Bake-Off Contest was held in Orlando Fla and I was lucky enough to be a finalist again.

My recipe chosen for the 44th Pillsbury Bake-off Contest was in the Dessert Category.

Again, this contest was so memorable with all of the events, the food, and all of the wonderful people I met.  The months leading up to the contest were full of practicing my recipe and doing media events.  This was the first year that Pillsbury added a voting element to the contest.

My recipe was paired against another dessert recipe and for a two week period the recipes were posted on the Pillsbury web site and voting was open.  I posted it on my Facebook page, sent emails, and told everyone I knew about it.   My local Kroger store was also very involved.  They had me to come to the store for the day and meet the public.  They even put up a billboard wishing me luck.

I baked multiple pans of my brownies, cut them into small pieces and placed in a clear bag tied with a ribbon, and instructions on how to vote for my recipe.  I set up a table in front of my store one day and handed out samples.  It was a lot of work to get votes but going to the Pillsbury Bake-Off Contest again was worth it.

I did not win any additional prizes this year but just being chosen as a finalist was a win for sure.

Here was my recipe: 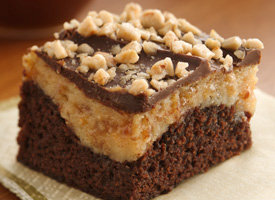